Pictures from the past

He couldn’t believe it when he heard her voice on the phone.

“Hi.” The same breathless sexiness he remembered so clearly from 25 years ago.

“I’m going to be in Washington next week. Would you like to have dinner? There’s something we need to talk about.”

Of course he would like to have dinner. He suggested a restaurant. She countered with the restaurant at the J.W. Marriott, where she would be staying. The date was set.

He leaned back and remembered. God, they were a lot of good memories there. Three years worth of passionate, intense memories. He was 22 and newly-divorced when he met this incredibly beautiful, unbelievably innocent 19-year-old from St. Louis.

He was unsure how he would fit into single life. She was unsure about dating a divorced man. But something clicked on that first date and the nervousness vanished, blown away by frantic lovemaking on the hood of his sports car. Only afterwards did he discover it was her first time.

That combination of a young man rediscovering single life and a young woman discovering her sexuality made him smile a quarter-of-a-century later.

That night, he pulled a half-dozen slide trays from his filing cabinet, loaded the first in the slide projector and dimmed the lights in his den. The first tray were the early photos of a fresh-faced 19-year-old with flaming red hair, lots of freckles and a smile that melted the most cynical of hearts.

Whether in jeans or the short skirts of the period, her youthful sexiness filled the screen. He suddenly realized he had an erection just from looking at the photos.

The next tray contained slides from a trip to the Bahamas. With her fair skin, she didn’t spend much time in the sun, but she did spend a lot of time in a bikini, a damned-tiny bikini.

It was on that trip that she asked him to take pictures of her without the bikini. The first photos were typical shyness – arms pulled together to conceal her breasts, legs crossed to hide what was “down there.” The shyness didn’t last long. Later photos showed it all.

He remembered the night at his house when she saw the pictures for the first time. It turned her on. After that, the camera became a permanent part of their sex life.

He loaded the next tray. Nothing shy or demure here. Some would call it hard core. Before sex, after sex, during sex. In the middle of the most explicit act, she would look into the camera with a gaze that said, “I’m good and damn proud of it.”

The photo sessions unlocked a desire for experimentation. She seduced a girlfriend and then wanted to talk about it. She wanted him to take pictures of her and her girlfriend in bed. He did, but found the photo shoot oddly disquieting. Then they asked him to join in. 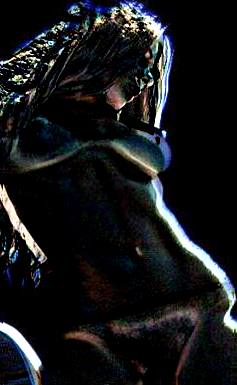 But then she stopped calling. On one trip through St. Louis, he tried her phone number. Disconnected. No forwarding number. That was more than 10 years ago.

As he sat in his darkened den and looked at the last tray of slides, he noticed a hardness in her looks that wasn’t there just three years early. The freshness was gone. The innocence lost forever. He put the trays away. Had he done that to her?

A week later, he sat in the restaurant at the J.W. Marriott and wondered if he would recognize her when she walked in. She might not recognize him. He was a lot thinner back then and there wasn’t any gray in the hair.

But the voice that said “hi” behind him still sounded young and innocent. He rose from his chair to greet a mature, but still stunningly attractive woman who kissed him on the cheek and moved to sit down.

The years had been a lot kinder to her. The hair was a darker red now and the tailored business suit did not hide a woman who had kept her youthful shape. Her felt a familiar stirring that he sat down quickly to hide.

“I tried to reach you in St. Louis some years ago. You weren’t there.”

“I moved to Chicago. It was time for a change. Went back to school. I’m a lawyer now.”

Of all the things he might have expected her to become, a lawyer was not one of them.

“No time for it. Besides, it I had wanted to get married, it would have been to you. As I recall, you weren’t interested.”

“I didn’t know if I would be enough for you.”

“Yes, I guess I was a handful back then. Took some time to get over it.”

“Have you gotten over it?”

“Yes. If you’re thinking of dragging me to one of the rooms upstairs, forget it. You had your chance to keep me in your bed and you didn’t want it that way. I know I pushed you away. I had a problem with sex. I had to deal with it. But you didn’t mind taking advantage of it whenever you could. Remember the Ambassadors Club in St. Louis? Are you blushing?”

He was. He didn’t think it was still possible.

“So why are we sitting here having dinner.”

“Two reasons. First, I wanted to see you, to bring some finality to our relationship. You were the first man I ever made love to. That means something. I loved you. I loved you a lot. But I loved sex more. I had to get that out of my system. I needed to let you know that I have survived that period of my life.”

“Second, I need you to destroy the pictures you have of me. I’m running for judge in Illinois. I don’t need that part of my past lying around out there.”

“God no! I want your word that you will destroy them, if you haven’t already.”

“I haven’t. I looked at them for the first time in years right after you called.”

This time it was her turn to blush.

“I had hoped you’d dumped those things years ago. Give me your word that you will destroy them.”

“You know which ones I mean.”

He nodded. They finished dinner. She insisted on paying, flashing an American Express Platinum Card. As they left, she asked him to walk her back to her room.

At the door, she turned and kissed him full on the lips, grinding her body against his.

“Do you want me?” Her voice was as breathless as ever in his ear.

“And I want you. It’s best we leave each other with that memory.” And then she closed the door in his face.

Later that night, he looked at the slides for a last time before feeding them, one at a time, through a shredder.

It wasn’t until he was finished that he realized he was crying.