He had been out of touch, away from phones and civilization, working on a job that took him deep into far away places.

So he was surprised when two men held a sign with his name on it when he got off the plane.

“Sir, there’s been an accident.”

“Your daughter and her husband were severely injured.”

“Megan’s hurt? What about the children?”

His knees buckled as a low moan rose out his throat. Not his daughter. Not his child.

“Sir, if you will come with us, we’ve arranged transportation.”

Later, he would remember nothing of the next several hours. Sitting on a plane, numb, staring at the back of the seat ahead of him, praying to a God he had long ignored, asking him to help him get there in time.

Three plane connections and too many hours later, he walked into the front door of the hospital. An expressionless nurse directed him to the Intensive Care Unit. His daughter’s best friend was there. So were his son-in-law’s parents and sister. She was crying.

“John’s dead,” she said. Her parents just stared down. 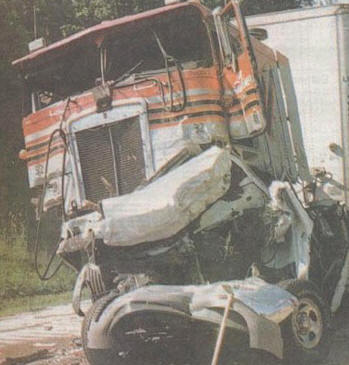 “Truck driver crossed the center line. Hit them head on. They never stood a chance.”

He walked trancelike into the room, afraid to look but knowing he had to. She was covered in bruises and bandages, hardly recognizable beneath the white gauze and purple contusions.

A nurse came in.

“Sir, you should wait outside.”

The nurse started to say something, then thought better of it. She left them alone.

Cathy came in. She and Megan had been friends since high school. Her face was frozen in a mask of phony self-control.

“There’s nothing we can do but wait. You look dead on your feet. Have you eaten.”

He thought back to a phone call just before he left on yet another business trip.

“I talked to her shortly before they left. They wanted me to come with them.”

“For God’s sake, why do you keep pushing yourself. You don’t need the money.”

It couldn’t have been the money 28 years ago when his wife packed up his daughter and left. They weren’t making much then and his drinking and anger at the world meant trouble for anyone who got in the way.

He didn’t fight the divorce or quibble over child support, even though a daughter who lived 2,000 miles away would be difficult to see. So he got her two months a year, in the summer, and — each time — was amazed at how much she had grown and changed from the last time he saw her.

Yet those two weeks always seemed to be important ones in her life: Her first period, first date, first case of puppy love. Her gave her a car on her 16th birthday. She wanted his Porsche, the one he bought before she could walk, but she settled for a Mustang.

As Megan grew older, his ex-wife complained that she was more and more like him. She chose a college just 90 minutes away from Washington, got married near her father, not her mother, and chose to live just another 90 miles away.

He started feeling old when the first grandchild arrived, was a little more mellow when number two came along and finally accepted his fate with the third.

God, how he spoiled those grandkids. Too many presents at Christmas. Gifts from the exotic places he visited in his work. A trust fund for each to use for college.

He worried about the townhouse they lived in. The neighborhood wasn’t safe, so he bought them a new home near good schools and surrounded by safer streets.

Nothing was too good for his only child. Nothing would harm her or her children.

Then a truck driver with too many hours on the road, too many uppers in his bloodstream and too many safety violations on his rig took it all away.

He sat by her bedside for hours, not sleeping, not talking, not doing anything but thinking and praying.

He watched her closely, looking for movement, recognition, a sign.

Finally, the doctor said he had to make a decision.

First he said no. He wouldn’t be the one to end his daughter’s life. Then he looked at the bruised, swollen mass of flesh that used to be his little girl and realized the truth.

So he signed the consent form.

Then they removed the life support.

And his daughter died.

Dark side of life in Washington, DC

Anger on the highway

Readin’, writin’ & getting it on

It couldn’t have been her